Fox News, CNN and other Mainstream media outlets are quick to blame Islam for the actions of few pervert in the Muslim community. In this article we will expose media and show why they blames Islam for the misdeeds of the few Muslim blacksheep

Islam is crystal clear when it comes to terrorism as mentioned in the following verse.

Whenever there is a bomb blast or any murder committed by some so called Muslim blacksheep, Main stream media (MSM) are swift to run their compaign in full swing and make non Muslims and weak Muslims to believe that Islam promotes terrorism.

Let's dig into this rabbit role of the MSM brainwashing plot and understand why media has to blame only Islam whenever Muslim commits crime or kill somebody or commit suicide attack and also understand why media does not blame other religions such as Christianity,Judaism, Buddhism, Hinduism,Sikhism etc., for the same act committed by their fellow followers. For some brainwashed people who does not know any other terrorist organization beside Al Qaeda or ISIS or Boko Haram or Taliban, check this out this All Terrorist are not Muslim?

One of the plots of the media to defame Islam is to associate things which are alien to Islam such as translating the word "Jihad" to "Holy War" which is blasphemous. The real meaning of the word Jihad is to "strive and struggle". 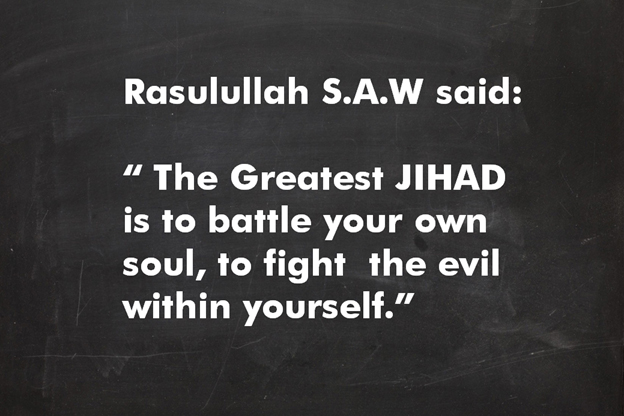 We don't have much time to cover in this article, if you are interested then please get enlightened with this video or read this article from our website.

Before going into the topic let dwell in what Jews and Christian book has to say on Jihad? Many people don't know that Jihad even exist in Bible as well.

Did You Know That Jihad Is In The Bible?

This may be shocking to some readers, but the Bible has been translated into Arabic. In fact, if you open your Bible right now and peruse through all of the translations of John 3:16, “Allah” is the word used to refer to God in the Arabic version right at the top of your page.

In 1 Peter 4:18, the word jahada, the root of jihad, is used to describe one’s internal struggle. It reads, “If it is a jihad (struggle) for the righteous to be saved, what will become of the ungodly and the sinner?

In both I Timothy and II Timothy, we find two references to jihad in the Arabic Bible: “I have fought the good jihad (fight), I have finished the race, I have kept the faith.” (II Timothy 4:7)

“Fight the good jihad (fight) of the faith. Take hold of the eternal life to which you were called when you made your good confession in the presence of many witnesses.” (I Timothy 6:12)

The Old Testament was found to be more than twice as violent as the Quran.An analysis into whether the Quran is more violent than the Bible found killing and destruction occur more frequently in the Christian texts than the Islamic.

Investigating whether the Quran really is more violent than its Judeo-Christian counterparts, software engineer Tom Anderson processed the text of the Holy books to find which contained the most violence.

Using text analytics software he had developed, named Odin Text, he analysed both the New International Version of both the Old and New Testaments as well as an English-language version of the Quran from 1957.

It took just two minutes for his software to read and analyse the three books.

An analysis into whether the Quran is more violent than the Bible found killing and destruction occur more frequently in the Christian texts than the Islamic.

Investigating whether the Quran really is more violent than its Judeo-Christian counterparts, software engineer Tom Anderson processed the text of the Holy books to find which contained the most violence.

In a blog post, Mr Anderson explains: "The project was inspired by the ongoing public debate around whether or not terrorism connected with Islamic fundamentalism reflects something inherently and distinctly violent about Islam compared to other major religions."

By categorising words into eight emotions - Joy, Anticipation, Anger, Disgust, Sadness, Surprise, Fear/Anxiety and Trust - the analysis found the Bible scored higher for anger and much lower for trust than the Quran.

Further analysis found the Old Testament was more violent than the New Testament, and more than twice as violent as the Quran.

"Of the three texts, the content in the Old Testament appears to be the most violent.

"Killing and destruction are referenced slightly more often in the New Testament (2.8%) than in the Quran (2.1%), but the Old Testament clearly leads—more than twice that of the Quran—in mentions of destruction and killing (5.3%)."

Why don't media first look into their own Holy Book instead of barking at Islam?

Islam is the fastest growing religion in the world

Islam is the fastest growing religion on the face of the Earth. It is the only reason why media blames Islam if any Muslim blacksheep commits some murder or crime. An article appeared in the Reader's Digest "Almanac" in the year 1986 which gave the increase in percentage of world's religion for the period between 1934 and 1984 and guess what? Islam had increased by 235% while Christianity was at 47%. In a recent study conducted by Pew Research Center, founds out that Islam's growth will be explosive and Muslims could reach 2.76 billion by the year 2050. Coming back to topic, as we all know media is run by Jewish corp and their Christian allies. They both read the same book called Bible and the fear thay have is that if this Islam growth continues like this then it will become issue for them as they are losing their own people day by day to Islam and Islam is also spreading by exponential growth of Muslim fertility in Muslim countries as well as Muslims living in Non Muslim countries. Hence Muslim will inevitably grow beyond the population of Christian and eventually overtake Christianism by a large number.

So in order to stop this Islam spreading beyond their control they have to take some steps. The step they initially took is that sending mercenaries to Muslim countries to get Muslim converted to Christianity which was miserably failed. The second step is to use media muscle to defame Islam and Muslim by highlighting Muslim perverts which are a small fraction of Muslim population and showing them as exemplory Muslims to mislead public that Islam means all the bad stuff.

By doing these things they believe that they can put stop to the exponential growth of Islam and Muslims but that also failed. After 9/11 inside job committed by the Western perverts, the stats shows that even more people are embracing Islam. So it back fired them here as well.

And [remember, O Muhammad], when those who disbelieved plotted against you to restrain you or kill you or evict you [from Makkah]. But they plan, and Allah plans. And Allah is the best of planners. Holy Quran 8:30

The third step is using desperate means to achieve their political goal. It is to use of most malicious and deceptive force to kill and destroy Muslim nation in the form of ISIS and Al Qaeda. Read here for more why ISIS is anti Islamic and serves only the interest of Western allies.

The Crusaders want to kill two birds with one stone. Defame Islam in the form of ISIS, Al Qaeda and kill Muslims in large number to stop the spread the Islam in one way or the other. If you are still not convinced then look here at this link where we have shown media reports 5 times more coverage if the perpetrator is a Muslim and also media under report terror incident if it is committed by Jews or Christians.

Couldn't believe? Then read this and find out most notorious terrorist organization on the face of the Earth which media does not report at all. Also read this link for white supremacist terrorist which media underreport or does not even report at all to the general public. Why is this double standard? It is hide their folks committing terrorist activities and prevent people to getting attracted by Islam.